skip to main | skip to sidebar

Tonight Lewisham council were discussing and voting on a sixty million pound cuts package in public services. One eye witness took this rather exciting footage of the crowd (estimates of around 400?) as they tried to get into the meeting.

One report talks of police dogs and horses (here) and the Lewisham twitter feed is going mental. (here). There were a whole host of Goldsmith's students there as well as campaigners for local libraries, against education cuts and to save the nurseries.

The cuts package was approved 36 for, 3 against and 11 abstentions. That's Labour for, Lib Dems all abstained and Greens and Tories voted against.

Darren Johnson explained why he was going to vote against the budget here and I had some some other thoughts about councillors in a time of cuts here. Pic of protesters on council balcony as councillors look up in awe (good shot of the back of Darren's head there) here. BBC report here and pic of loads of horsies and cop cars here more arty one here.

I just noticed that the Labour Party has rather neatly published a breakdown of the recent leadership vote in which Ed Miliband won. I thought it would be interesting to have a look at how Lewisham Labour Party voted in the election.

If you take all three constituencies the breakdown looks like this; 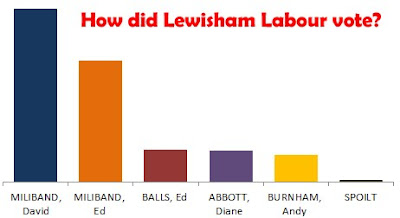 The obvious headlines are that Labour Party members in Lewisham pretty heavily voted for a candidate that did not win and that in the West there was a surge to Balls and Abbott, in the East to Burnham...

Any explanations for this? It looks on first examination that the East, with it's heavy vote for David Miliband (and Burnham surge) is certainly the most right wing party of the three.

You can also see how the MPs voted here. Lewisham Deptford's Joan Ruddock cast her vote for Ed Miliband and gave none of the other candidates her second preferences (just as well he won I suppose).

Heidi Alexander, from Lewisham East, voted Andy Burnham [1], which may explain the East's Burnham vote or be a product of it. Her second and third preferences were for David and Ed Miliband.

Jim Dowd of Lewisham West took a leaf out of Joan Ruddock's book and only voted for one candidate. However, like many of Lewisham Labour members he choose the losing Miliband brother, David.

Labels: In the news, Labour

I have a confession to make. I support the tube strike. In fact I've two confessions to make, the second one even more terrible... the strike didn't even inconvenience me, but I'd still have supported it even if it had.

The Evening Standard today reports of a third near tube collision in the space of three months. This underlines the need to maintain and improve safety on the tube, but management are intent on cutting costs, something that could end up costing lives.

The proposal to slash 800 jobs and close ticket offices means yet more inconvenience and hassle to us God-fearing travellers (and there are no atheists in fox holes or rush hour) which we could all do without - but more importantly it puts people in danger.

It was very disappointing to hear that yesterday Conservative Assembly Member walked out of the Assembly in a cynical move to prevent any discussion on tube safety. It's a real problem that the Tories are more interested in party political games than the safety of the travelling public.

That's why the strike is so important, and why we should all support the demands of the rail unions that their jobs and our safety should come first.
Posted by Jim Jepps at 09:31 No comments:

I wasn't able to attend Monday's meeting on Crofton Park library so I asked fellow Green Charlotte Dingle, who was there, to send me a quick report on this important issue.

Lewisham council recently revealed that it has identified libraries as a prime target for cuts over the next few years, with plans afoot to shut a number of them for good. On the council’s hit-list are the Blackheath Village, Crofton Park, Grove Park, New Cross and Sydenham libraries.

Crofton Park library has been earmarked as the first candidate for closure because the building is in dire need of refurbishment and, after Blackheath library, it is the library currently costing the council the most money. A consultation meeting on its proposed shutdown took place at St Saviours Church in Brockley on Monday 23rd August, with around 100 people in attendance.

The consultation saw various proposals outlined by council officers, including keeping the library open by allowing volunteers to run it. However, they didn’t really outline any particularly well thought-out alternatives, and spent a lot of time skirting around questions, such as where the volunteers would come from. Perhaps they expect the sacked Crofton Park librarians to come back and work for free? Their suggestion that existing staff would be ‘redistributed’ amongst the remaining libraries in Lewisham was nonsense to anyone with a basic grasp of maths, so despite their best efforts, there was little doubt in everyone’s minds as to the inevitable fate of the library’s current staff.

Amongst those speaking from the floor were a foster mother who said her charges had found their lives transformed by the library; a primary school pupil who begged the council not to take away her primary source of research materials for school projects; a disabled woman in her 90s who told us she would be unable to travel to a library further out; and the library’s head librarian, who claimed to have seen the library consistently well-attended for the past 50 years.

The cuts have to be made somewhere (although perhaps not to the draconian degree that Lewisham council seems to believe), but taking away valuable community resources is surely not the answer. The woman who pointed out that various council officers are raking in around £100,000 a year perhaps made one of the most valid points of the evening...
Posted by Jim Jepps at 06:26 No comments:

This is actually in Ladywell, rather than Crofton Park, but I felt a touch of sadness none the less seeing what was happening to such a lovely old iconic building. I thought the crows seemed particularly ominous in this setting. 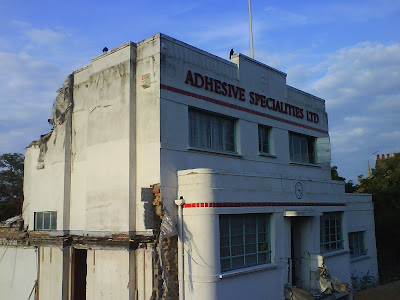 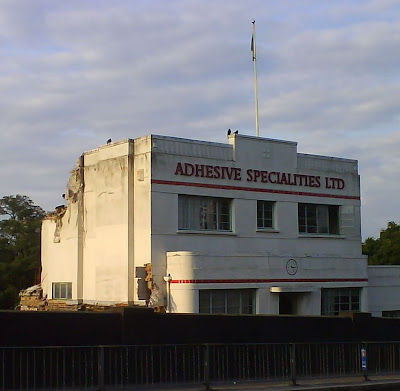 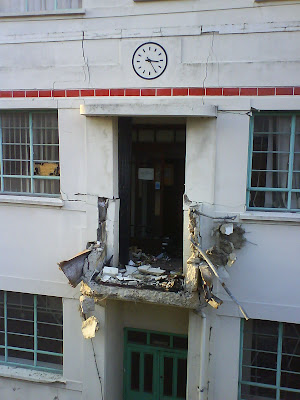 There's something I found quite touching about this image of the stopped clock, the useless door that leads off a ledge and the abrupt finality of closing off the entrance.
Posted by Jim Jepps at 08:37 4 comments:

First posted at The Daily (Maybe)

To think I voted for Sir Steve Bullock second preference at this year's Lewisham Mayoral election. Anyway, he's repaid my act of charity by branding protesters against the cuts "fucking idiots" and demanded that they "get real" - all while he was chairing a cabinet meeting. That's multi-tasking for you.

So much for Labour being the anti-cuts party. In Lewisham we're blessed with the fact that those fighting the cuts find themselves opposed to both the Liberal-Tory national coalition and the Labour council who were announcing closures before we even knew who the national government was.

Last night around one hundred protesters lobbied the council over their plans to, among other things, close five local libraries, shut down nurseries and reduce council staff. For an area where unemployment is on the rise the loss of local services and laying off workers seems completely the wrong way to go.

Hangbitch who attended the protest says that "we all know that these immediate economies are false economies. Bullock’s huge list targets people we (literally) can’t afford to target."

Meanwhile what does Sir Steve have to say about his disrespect for those who want decent public services and had hoped that this Labour council would fight to keep every job? “I think I may have left the mic on while I was making an aside.”

I'm assuming "aside" is a euphemism that we'll all be taking up soon in Lewisham. I'm pretty sure they'll be plenty of "asides" made about Sir Steve's attitude in the coming months as the council prepares the redundancy notices.
Posted by Jim Jepps at 08:08 No comments:

On the blog we discuss interesting things that are happening in the ward, issues that affect Lewisham and a few bits and bobs about how the Green Party sees the world.

We've been talking to local residents about the problems we all face locally, the things we'd like to see improve and also the things we love about the area.

We hope you'll find this a useful site to come and visit and feel free to leave a polite message.

Alternatively you can email us at croftonpark@greenparty.org.uk 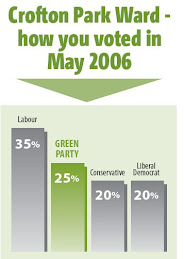